Remarkable cases of economic concentration in 2014 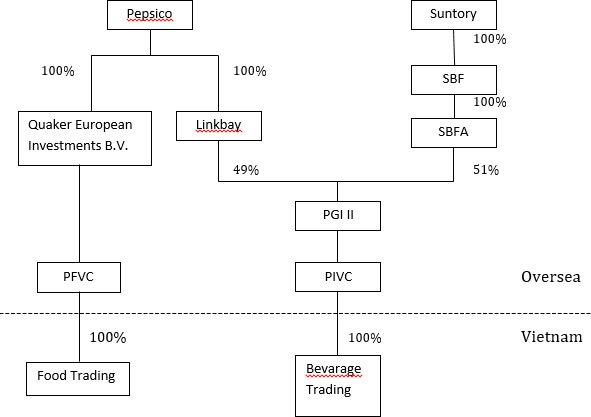 Suntory Beverage & Food (SBF) and Suntory Beverage & Food Asia(SBFA) operating in foreign countries (the Netherlands and Singapore) has acquired 51% stake in the PepsiCo Global Investment II BV (PGI II) - a subsidiary of Linkbay, an affiliated company of Pepsi Co. Group. Suntory Holdings Limited owns two subsidiaries: SBF and SBFA. This group carried out transactions abroad with PepsiCo to buy 51% stake of PGI II. This is the transaction between 2 groups taken outside of Vietnam (see diagram described in the attachment).

However, PGI II operating the food and beverage of PepsiCo in Vietnam holds 100% equity of PepsiCo Vietnam (PIVC). That means PepsiCo has subsidiaries in Vietnam, operating business in Vietnam (reference, the Commercial Law and the Law on Enterprises). After the acquisitions are completed, PIVC will separate food business for a food company to operate, PIVC only operate the field of beverage.

Although Suntory has no commercial presence in Vietnam but the Suntory’s drinks are still available and sold in Vietnam (imported and distributed in Vietnam). The acquisition is performed abroad, but both enterprises are now operating in Vietnam, so they are still be subject to the application of the competition law.

The acquisition above is under the competition law (Article 16, the Competition Law and Article 34 of Decree 116 / ND-CP). The relevant market is the beverage market with a national scale. Based on the market share reports by the enterprise, the market share of PIVC in 2010 and 2011 is 45.6% and 47.1% respectively (data of two years before transaction is conducted), Suntory's share respectively is 0.2% and 0.3%. Thus, the combined market share of the two businesses is 45.8% and 47.4%, which is in the  threshold of control economic concentration (from 30% to 50%). Therefore, the enterprises have obligations to make the notification about the economic concentration. This acquisition is not prohibited so the business should implement the economic concentration procedure in authorized state agencies under the law.

Pursuant to Paragraph 3 of Article 17 of the Competition Law, the case of economic concentration is under an acquisition a business, Abbott Investments Luxembourg Sarl buy CFR Pharmaceuticals SA from Positron Ltd Limited.

The acquisition is taken oversea, which does not alter the structure of the pharmaceutical market of Vietnam.

The combined market shares of the parties on the related product market in Vietnam is less than 50%. Therefore, pursuant to Article 18 of the Competition Law, the acquisition mentioned above shall not be prohibited in cases stipulated by the Competition Law.