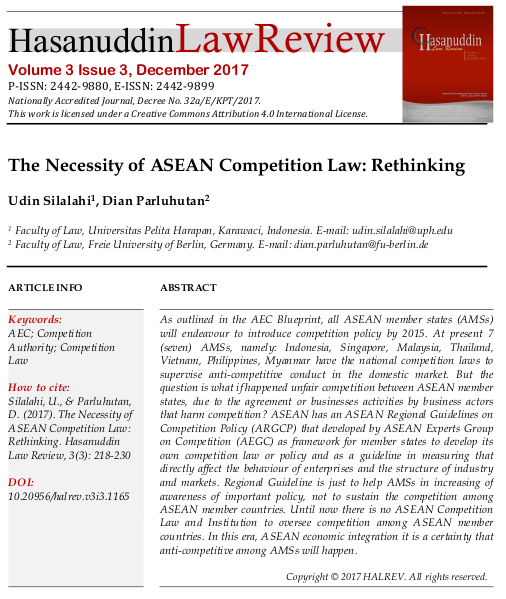 As outlined in the AEC Blueprint, all ASEAN member states (AMSs) will endeavour to introduce competition policy by 2015. At present 7 (seven) AMSs, namely: Indonesia, Singapore, Malaysia, Thailand, Vietnam, Philippines, Myanmar have the national competition laws to supervise anti-competitive conduct in the domestic market. But the question is what if happened unfair competition between ASEAN member states, due to the agreement or businesses activities by business actors that harm competition? ASEAN has an ASEAN Regional Guidelines on Competition Policy (ARGCP) that developed by ASEAN Experts Group on Competition (AEGC) as framework for member states to develop its own competition law or policy and as a guideline in measuring that directly affect the behaviour of enterprises and the structure of industry and markets. Regional Guideline is just to help AMSs in increasing of awareness of important policy, not to sustain the competition among ASEAN member countries. Until now there is no ASEAN Competition Law and Institution to oversee competition among ASEAN member countries. In this era, ASEAN economic integration it is a certainty that anti-competitive among AMSs will happen.