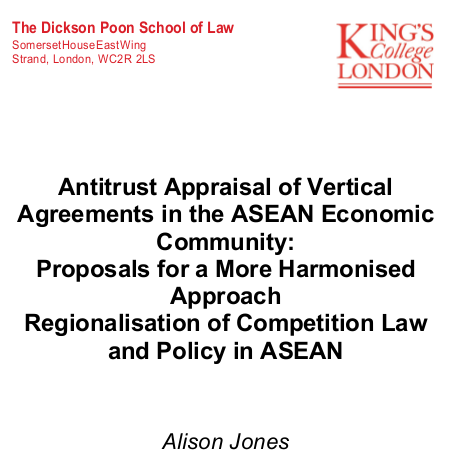 Antitrust Appraisal of Vertical Agreements in the ASEAN Economic Community

Abstract: In spite of the ASEAN goal of harmonising national competition policies and laws, the ASEAN Member States (AMSs) adopt an array of different approaches towards a number of procedural and substantive competition law issues, including the substantive appraisal of vertical agreements. The question of whether, and if so how,  analysis of vertical agreements under the competition laws of the AMSs should be aligned has, to date, received little attention from ASEAN competition agencies. This paper notes that this is, nonetheless, a matter of considerable importance. Not only do the differences in approach adopted undermine ASEAN’s stated objectives, but they are likely to be damaging competition and efficiency and inhibiting market integration.

The paper draws on practice and experience in the US and EU to consider whether, and if so how, the approach to vertical agreements under the competition law systems of the AMSs should be reformed or developed to ensure a more coherent policy which is optimal for achieving ASEAN’s objectives. One issue considered is whether the EU policy towards resale price maintenance and restraints on cross-border trade should be emulated. In particular, whether a hardline approach should be adopted against vertical restraints which enable firms to partition the ASEAN market along national lines and perpetuate price differences in the AMSs, thereby undermining its single market  objective.

The paper concludes that although greater harmonisation of policies towards vertical agreements might be desirable, it will be difficult to achieve within the existing national systems without some legislative changes and significant cooperation between the ASEAN competition authorities. Given the different perspectives that the separate legislative regimes reflect, debate will be required to build consensus around a more uniform approach that can effectively be implemented within each of the national systems.