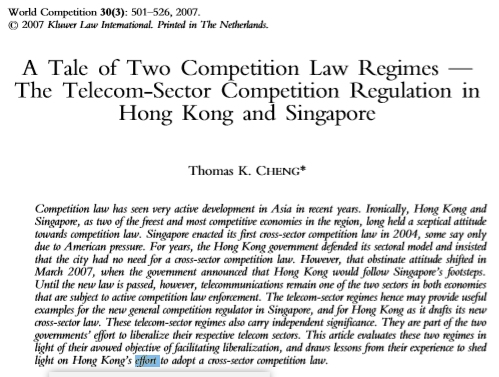 Competition law has seen very active development in Asia in recent years. Ironically, Hong Kong and Singapore, as two of the freest and most competitive economies in the region, long held a sceptical attitude towards competition law. Singapore enacted its first cross-sector competition law in 2004, some say only due to American pressure. For years, the Hong Kong government defended its sectoral model and insisted that the city had no need for a cross-sector competition law. However, that obstinate attitude shifted in March 2007, when the government announced that Hong Kong would follow Singapore's footsteps. Until the new law is passed, however, telecommunications remain one of the two sectors in both economies that are subject to active competition law enforcement. The telecom-sector regimes hence may provide useful examples for the new general competition regulator in Singapore, and for Hong Kong as it drafts its new cross-sector law. These telecom-sector regimes also carry independent significance. They are part of the two governments' effort to liberalize their respective telecom sectors. This article evaluates these two regimes in light of their avowed objective of facilitating liberalization, and draws lessons from their experience to shed light on Hong Kong's effort to adopt a cross-sector competition law.